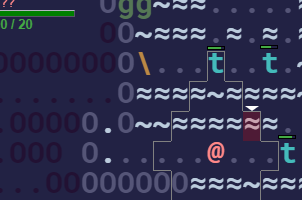 An ASCII roguelike RPG playable with 6 keys. More depth than you would expect.

(Game title is subject to change)

A simple RPG with real-time battle and idle mechanics. Encounter various enemies and bosses. Features an experimental idling mechanic where fight and encounters are automatic.

Escape the rising lava. Control with [Arrow Keys]. This is my attempt on JS1K 2019.

A Turing implementation of Desktop Tower Defense. Back when I still knew how to write code.

Based on the open source version of Liero. With option to increase blood up to 500%, enable infinite fan, and more.

Can't find my source code, but here is a video.

Feel free to share my games, and link to this site. Selling, profitting from my games is NOT allowed.

Created in 2011 to host my projects. This website was initially a simple plain HTML website. Gradually, I added more and more fancy technologies by following the trends - this includes AngularJS, cool CSS library, SASS, a python backend for commenting, and even a markdown editor. In 2018, I killed it all and return it back to a static website, as all clean websites should look.

Still bad at making games after all these years.

Larpa is a weapon that leaves falling bullet rain on its trail. Larpa originated from Liero, a DOS game created in 1998. Larpa is the most useful and imblanced weapon in the entire game. A player with larpa always wins againt a player without larpa, no exceptions.

This site is named after larpa for its awesomeness.

Bouncy larpa and chiquita bomb are pretty good too.